Well, over the last month I have acquired a new toy – a telescope. This is the first scope I have owned in many years (since the 70s actually), and the first one I have used since my university days of the early 1980’s. Needless to say, things have change significantly in that time. I actually spent a considerable length of time debating what I actually wanted to buy – a large Dobsonian vs a small portable refractor which would be great for imaging vs. a fancy computerized Schmidt Cassegrain (or similar).

Instead of going through all my internal debates, I will just jump to the end result. I ended up buying a Celestron CPC 1100, which is an 11 inch, fork-mounted, computerized Schmidt Cassegrain, and is pictured below. I purchased the scope from Astromechanics in Barrie, ON. Despite some adventures with the shipping company, who “misplaced” the tripod for a few days, I must say dealing with Dave with Astromechanics has been a pleasure. 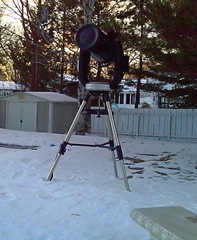 The telescope itself is, to say the least, really cool. As an astronomer/physicist-turned-software guy, there are many things on this scope to draw my attention. Mechanically, the scope, mount, and tripod are all very good. I have not seen any marks or blemishes, everything fits together cleanly, and is extremely steady.

The optics seem extremely good as well. Last night was my first real night of observing. The sky was very transparent, but there was a fair amount of instability in the atmosphere (really only noticeable when looking at the moon and Saturn, though). I was very impressed with the views. My first target was M42 (the Great Nebula in Orion). While I have seen this many, many times before, it remains one of my favourites, and was no disappointment in my new scope. Using a Baader Planetarium Hyperion 21 mm eyepiece (giving a magnification of 133x and a field of view of about half a degree), the view was breathtaking. A great deal of detail was visible, with tendrils and wisps extending pretty much across the field.

Observing Saturn next, I was impressed with the detail which could be seen in the rings during occasional moments of steadiness, along with hints of detail on Saturn’s cloud tops.

I also spent quite a bit of time looking at various open clusters (M36, M37, M38, M41). I could sit and stare all night at this sparkling collections (except of course I was freezing various body parts off!).

What impresses me most right now, though, is the alignment and GoTo software in this scope. For those not familiar with these products, this is a truly amazing piece of programming. All you have to do it level the tripod, set up the scope, wait for it to lock on the GPS signals, then point it at any three bright objects (stars, planets, or the moon), and the telescope figures out all the details it needs to be able to automatically go to any of ~40K objects in its database. The first couple of nights I was out, my tripod was still missing, so I had the scope set up on a folding portable workbench. I could not level it very well, and used three stars in the same part of the sky for alignment. Even with this, the go to consistently centred all of the objects I selected. Having now set the scope up on its tripod, and used stars more “distributed” around the sky to align, go to seems to be perfect. I have yet to see any problems, hiccups or glitches (and those of you who know me, know I can break almost any computer!).

Given the amount of stuff out there which you have to fight with to make work, it is refreshing to use something that just works!

Over the next few months, I hope to get into doing some imaging. I will post the results if I am in any way successful.