We need a new option on election ballots – “None of the Above”. If none of the parties manage to field a platform or a candidate worth my vote, I should be able to express that fact in a meaningful way and still have my voice heard. If “None of the Above” wins in my constituency, then there MUST be a new election, with NEW candidates (the same hacks cannot run again). We could really weed a lot of crap out of our government that way, and possibly increase voter turnout – why vote it you do not approve of any of the options?

Hallucinations in Hospital Pose Risk to the Elderly – NYTimes.com

I got this link from my sister – it is relevant to us because of some stuff our mom is going through in the hospital. This is really scary!

Ok – I was tempted to blog about the Vikings-Saints game on Sunday night, but really did not have anything to say that was not obvious.  This column, however, brought out the need to say something.

First off, is this writer the biggest freaking moron in the world?

To say that Favre threw the ball that was intercepted because he was afraid to get hit is just silly. This is a guy who stood in the pocket and got pounded into the (fake) dirt almost every time he dropped back to pass on Sunday night.

And he got back up, every time.

He got drilled by New Orleans’ #93 after handing the ball off in the first half. And jumped right back up.

He got driven into the ground in the fourth, drawing a personal fowl. And got back up.

He got hit high and low a couple of plays later, in what should clearly have been a penalty under the “Brady Rule”. He had to be helped off the field, but was right back out there the next play.

I lost count of the number of times Favre was hit and hit hard. And then add to that the number of hits he dodged (which he still does damn well for a 40 year old guy).

I would say that Favre’s performance on Sunday was one of the toughest I have ever seen, in any sport.

As for the “He should have run it” argument, are we forgetting the fact that a few minutes earlier it looked like Favre would not be able to walk, let alone run?

Let’s look not at the whole “Favre lost the game” delusion.

This highlights, in part, the folly of Favre’s return this season. It was clear from the start that if the Vikings were to go all the way, then it would be credited to “the team”, but if they failed to it would be “Favre’s fault”.

But let’s look at how they got to the point of needing last minute heroics. Lets look at the ball carriers of the Vikings putting it on the ground 6 times. Lets look at Percy Harvin fumble putting the Saints 7 yards from a touchdown that gave them a 7 point lead, when the Vikings defence had shut them down through the entire second half. Lets talk about an offensive line that left Favre dangling in the breeze almost every play. Lets talk about the complete mental lapse that led to 12 men in the huddle (after a time out to get things organized, yet).

Like their season, this was a team effort. No one player should be singled out. But of course, Favre gets the blame.

Was the decision to throw, and throw where he did, a bad one? Sure. But if he had managed to force it where he wanted it (as he has so many times before) he would have been a hero, not a bum.

But the fact is, he would not have been in the position to have to make this play if not for all the other errors the Vikings committed throughout the game.

I really get sick of wannabe, sideline athletes (even long term, successful ones like Posnanski) sitting back and questioning the toughness and commitment of someone like Favre.

As for Posnanski’s final question “So: What makes Brett Favre NOT run?” – well, leaving aside the fact that he could barely walk, let a lone run, maybe it was the fact that he has been playing QB for almost 20 years, and may actually see things that morons like you don’t.

Well, I am sitting here writing a blog post because I am not at the hospital with my son for his jaw surgery that was scheduled for today. It was cancelled because the surgeon was called in for an emergency case which obviously took precedence.

My first thought (and I tweeted this) was “this is the downside of Canadian health care”. After a little reflection, however, I think that this is exactly what makes Canadian health care superior to American health care in the large. It shows that in the Canadian system, decisions are made based on who is in the most need, and the person in the most need gets the appropriate resources. Compare this to the US situation where the person with the most money or the best insurance will get the treatment, and the person with no money or insurance may never get anything beyond rudimentary care (if that).

This is inconvenient to me, and to my son, but it is not life threatening.

Once again, I will take the Canadian system, thanks.

I was sitting in a meeting today, and I got thinking about my computer. I have 4 right now. The one I had with me was my Acer convertible tablet from PDC. I also have a Dell XPS laptop, a Motion Computing LE1600, and from work I have a pretty standard HP laptop.

I use all of these for different things.

Right now I am using the Acer a lot, just because it is new and I am experimenting with multi-touch.

Mostly I use my XPS for gaming (which I don’t do much anymore) and for programming. It has 4 gb of RAM, so I have enough room to run a VM for development environments.

I would like to replace my slate, but there is nothing out there in a reasonable price range that really strikes my fancy. It does not seem that the slate tablet has progressed much at all in the last few years – and there does not seem to be much interest in slates in the marketplace.

There is a lot of interest right now in eBook readers, and while I think they are cool, I cannot see carry yet another device for nothing but reading.

So I got thinking today “what would the perfect slate tablet look like for me.”

Here is a list of what I came up with:

So that is my quick and dirty wish list – can anyone add anything more?

I find this extremely disturbing. It is part of a major trend over the last couple of decades whereby self-proclaimed “people of faith” try to inflict their beliefs on those around them. It is especially inappropriate when the CEO of a corporation makes it clear that the organizations beliefs are Christian beliefs. While the article says:

Bedford says he doesn’t try to convert anyone or require faith as an employment litmus test.

Unfortunately that fact that he makes it clear that the organization’s beliefs are Christian beliefs, any employee who does not share those beliefs is going to feel extremely threatened. If I am an Atheist, Wiccan, Buddhist, or an adherent to any belief system which does not match the Christian view of God, I would feel pressured to either pretend to share Christian beliefs, or leave. I would certainly feel like I had no career path in this organization.

I am not saying an organization should no put forward a value system. What is wrong is to bring an explicit statement of a specific religious doctrine into it. If his vision statements such as “every employee, regardless of personal beliefs or world view, has been created in the image and likeness of God.”, that is imposing upon me a creationist, fundamentalist view of the world, which is inappropriate.

Also implicit in this kind of thing is the commonly held belief (among “true believers”, anyway) that if you do not believe in God, and specifically a Judeo-Christian God, then you do not have beliefs, or morals, or values, or principles. I would put my beliefs and morals and principles up against any Christian on the planet – and am fairly confident my values are more “Christian” than those who support war, capital punishment, intolerance, racism, and yet call themselves “Christian”.

So, bring all the values and principles you want into a company, but please leave your religious dogma at the door.

PS – I did not mean to imply that my values are perfect, or that I am in any way perfect – only that being “Christian” is hardly proof positive that you have strong values, or any values at all for that matter.

Well, we finally got some decent weather last week (not raining, but not so hot and humid that I could not really see much), so I had a shot at some astrophotography. My equipment is:

Since I do not (yet) have an equatorial wedge for my telescope, I am limited in the exposure lengths I can use to about 10-30 seconds before field rotation ruins the image.

My first attempt was a simple star picture – Albireo – which is a pretty double star in the constellation Cygnus. This is a stack of 10, 15 second exposures:

My second attempt was of M13, a globular cluster in the constellation Hercules. This is a stack or 15, 15 second exposures:

Finally, I decided to try M57, the Ring Nebula, in the constellation Lyra. This is a stack of 20, 15 second exposures: 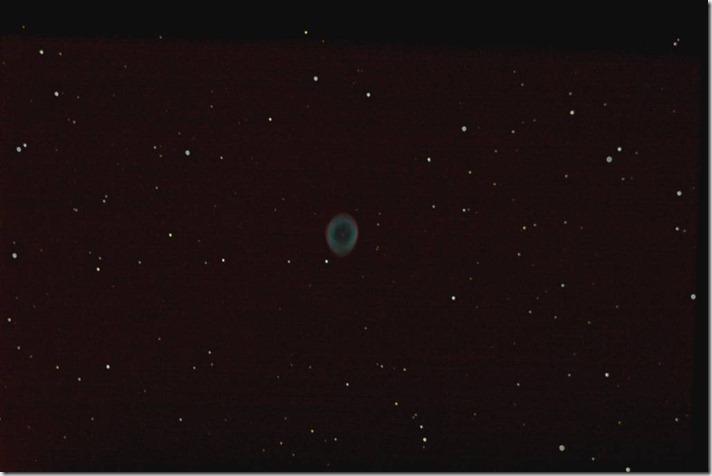 As I say, these are my first attempts at non-lunar, non-planetary images. I wanted to quickly work with a low number of images to stack initially, to see if I could get reasonable results. Next chance I get, I will focus more on one object, and go for a larger number of images to try to get more detail, better noise, etc. I am also just learning to use the image processing software, which is a major effort in and of itself.

(someday I will get a wedge, and be able to try longer individual exposures).